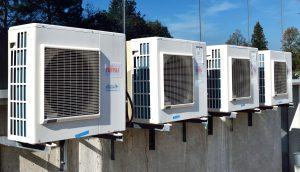 All of our TM44 Inspections are carried out by fully qualified Level 3 & 4 TM44 Air Conditioning Energy Assessors that are CRB/DBS checked where required.

We offer an independent, non-bias service meaning that all of our reports will provide you genuine ways to save costs on energy without costing your business a small fortune.

1st Call Surveys can take ownership of projects and building portfolios, focusing on solutions and delivering successful outcomes ensuring that your business or portfolio is up to date and compliant with the latest TM44 Regulations for another five years.

WHAT HAPPENS DURING A TM44 INSPECTION?

The 1st Call Surveys Energy Assessor will examine the refrigeration and air movement equipment that are part of the premises air conditioning systems and their controls. They will also examine any documentation that helps to understand the systems, or indicates the extent to which the systems have been maintained.

Our Energy Assessor is also required to estimate whether the system is suitably sized for the cooling loads in the treated spaces, and to provide advice on ways in which the performance of the system might be improved.

Access will be required to equipment that may be located in plant rooms, or outside the building, including rooftops or other locations with limited provision for access.

WHAT HAPPENS AFTER A TM44 INSPECTION?

Once the Air Conditioning Energy Assessor has completed the TM44 Inspection, our client, depending on the type of air conditioning equipment, will receive a Level 3 or Level 4 TM44 Air Conditioning Report & Certificate which has been lodged on the Landmark Registry. The report will highlight measures which will have the potential to save energy and money for your premises or organisation.

TM44 Air Conditioning Inspection reports remain valid for five years, after which the air conditioning system will require another TM44 Inspection carried out.

1st Call Surveys are finding that more and more businesses are now requiring a TM44 Inspection to comply with ISO 14001 requirements.

If you are ISO accredited the penalties can be more severe than just a fine as failure to provide a TM44 Certificate that has been completed by an accredited assessor can result in your ISO being at risk. Quality Assurance Auditors can simply look on the Landmark Registry to check your business is compliant and that the TM44 Report & Certificate exists.

Feel free to contact us if you want further information on this subject.

We continue to provide a great service to our growing database of nationwide clients. Should you have any questions regarding TM44 inspections or regulations or you would like a quotation, please give us a call on: 01908 904141.

Alternatively, if you would like us to call you back please fill out our enquiry form on our contact page and we will call you back at a time that’s convenient for you.

Having your air-conditioning system inspected by an Energy Assessor is designed to improve efficiency and reduce the electricity consumption, operating costs and carbon emissions for your system. Energy inspections will highlight improvements to the operation of your existing systems or opportunities to replace older, less energy efficient systems or oversized systems with new energy efficient systems. As the replacement of refrigerant is restricted in older systems (as established under other legislation), there is an additional incentive to improve or replace older systems with more modern energy efficient units.

Building owners and managers who control air-conditioning systems have statutory obligations and duties of care in the operation and maintenance of air-conditioning systems. Inspection, maintenance and cleaning programmes maintain the ability of the system to provide healthy and comfortable environments for building occupants, limiting the escape of refrigerant gases and ensuring the safety of equipment.

When are air conditioning inspections are required?

What are the penalties for not having an air-conditioning inspection report?

The penalty for failing to having an air-conditioning inspection report is fixed at present at £300. If you are issued with a penalty charge notice and you believe it should not have been issued you can request a review. If you are not satisfied with the outcome of the review you may appeal to the county court within 28 days after you are given notice confirming the penalty charge notice from the local authority. If you want to sell or let a building with an air-conditioning system which should have been inspected, then it is very likely that the legal advisor’s to the potential tenant or buyer will require sight of the report during the legal processes prior to exchange of contracts. Failure to have a report where one is required may have a negative impact on the transaction process.

We can help with the Design, Install, Management and Maintenance for a wide range of air conditioning systems from the leading manufacturers.

Do you require an EPC ? Failure to comply can result in a fine of between £500 and £5,000 for each building that does not comply with regulations.

Need to see the condition of an old AC unit? Want to see how hot your servers are getting with your current AC system in operation? We can help.

GET A QUOTE
Scroll to top